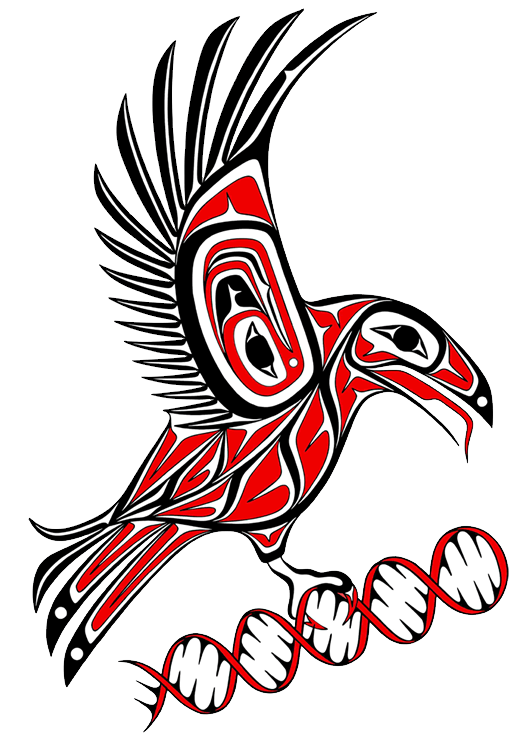 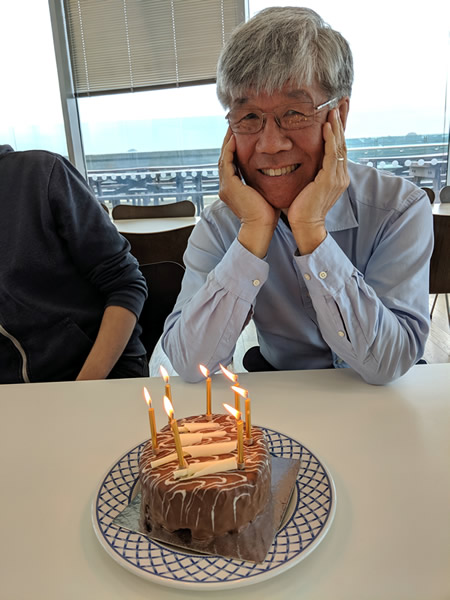 Kiyoshi Nagai was born in Osaka in 1949. He showed great academic promise at school and took a degree in Biophysics at Osaka University, followed by his PhD at Osaka investigating cooperativity in mammalian haemoglobins. During his time as a graduate student Kiyoshi spent 18 months at the MRC Laboratory of Molecular Biology in Cambridge, working with Max Perutz. He clearly made quite an impression on his eminent mentor, and in 1981 Kiyoshi was invited back to the LMB in Cambridge to join the Perutz group as a post-doc. Kiyoshi took on the ambitious and challenging task of developing methods for expressing and purifying recombinant haemoglobins for biophysical and structural analysis, and he succeeded beyond all expectations.

It was no surprise, therefore, that Kiyoshi was encouraged to join the LMB for the long term and he was awarded a tenured Group Leader position in 1987. The unique atmosphere of the LMB was perfectly suited to Kiyoshi’s particular, hands-on way of doing science, and he was to remain here for the rest of his life. In the late 1980’s Kiyoshi became interested in RNA binding proteins, and this line of enquiry gradually developed into the central, continuous theme of his research career for the next 30 years. His focus was structural analysis of the spliceosome, the complex molecular machine that catalyses pre-mRNA splicing. Splicing had been discovered in the late 1970s, and intense investigation using genetic and biochemical methods during the 1980s had started to reveal the complexity of the splicing machinery and some of the mechanistic details of the splicing process. 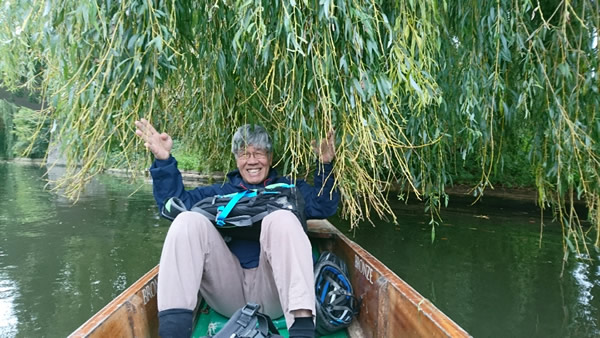 At this point, whilst it was clear that spliceosomes were large, complex and dynamic molecular machines, the structural biology of the spliceosome was in its infancy. Kiyoshi set out to explore this unknown structural space using X-ray crystallography, initially with the aim of determining the structure of an RNA Recognition Motif [RRM] from the U1A protein, a component of the spliceosome’s U1 snRNP sub-unit. This RNA-protein complex had early on been implicated in the recognition of 5’ splice sites. Variants of RRM protein domains are found throughout the biological world and the crystal structure gave important insight into how RRMs could recognise specific features of their RNA binding partners. Structures of RRMs bound to their cognate RNAs soon emerged from Kiyoshi’s group, throwing further light on RNA recognition by RRMs. Each success demanded heroic efforts in expressing, purifying and co-crystallising the recombinant protein and synthetic RNA partners. 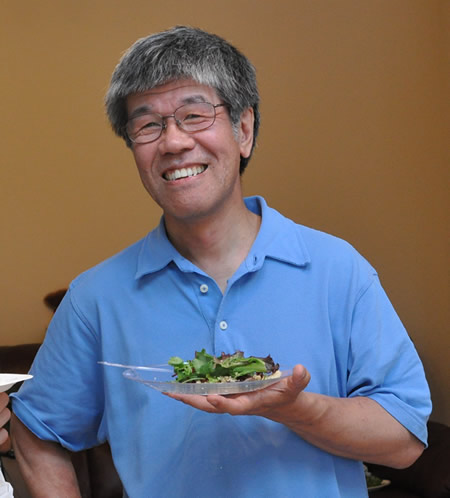 Early in the new millennium Kiyoshi’s group took on a challenging new project aimed at reconstituting human U1 snRNP from recombinant components, crystallising the complex and determining its structure. After an immense effort over several years this project culminated in landmark papers in Nature and eLife, revealing the essentially complete network of protein-protein and RNA-protein interactions in U1 snRNP. This work produced important insights into the mechanism of 5’ splice site recognition, showing how the U1C protein stabilises the RNA duplex formed between the 5’ splice site and the 5’ end of U1 snRNA.

Genetic and biochemical studies from the 1990’s onwards focused a great deal of attention on 2 large, multi-domain proteins that are components of the U5 snRNP: Brr2 and Prp8. Brr2 is a helicase that unwinds the U4/U6 snRNA duplex, promoting spliceosome activation by releasing U4 snRNA and allowing U6 snRNA to perform its crucial role in the catalytic core of the spliceosome. Prp8 crosslinks to crucial U5 and U6 snRNA sequences and to all 3 reactive sites in the pre-mRNA. Together with the fact that Prp8 mutations often act as suppressors of splicing defects caused by 5’ or 3’ splice site mutations this suggested that Prp8 must be close to the active site of the spliceosome. These large, multi-domain proteins could not be produced in useful quantities in standard bacterial expression systems so their structural analysis was critically dependent on the development of a novel expression system. A versatile yeast expression system was designed and gradually optimised in Kiyoshi’s group from about 2007 onwards, allowing robust expression of these multi-domain eukaryotic proteins. The crystal structures of the Brr2 and Prp8 U5 snRNP proteins provided important insights into spliceosome activation and revealed new Reverse Transcriptase and Endonuclease domains in Prp8. Prp8 was shown to form a cavity whose concave electropositive surface was the site of suppressors and RNA crosslinks: the active site cavity of the spliceosome. The Prp8 structure revealed clear sequence and structural similarities to Group II Intron-Encoded Proteins [IEPs], providing compelling new evidence of a common evolutionary origin for pre-mRNA splicing and Group II intron self-splicing. 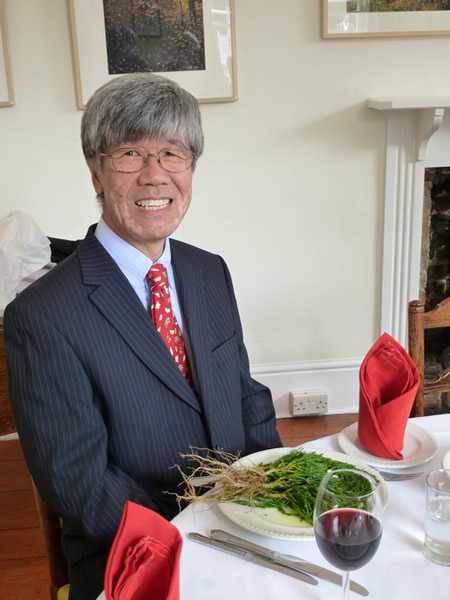 Advances in single particle cryo-EM methods over the last few years have revolutionised the structural analysis of ribosomes, spliceosomes and indeed all manner of macromolecular complexes, allowing their structures to be determined using quite small amounts of material purified from living cells or cell extracts. Kiyoshi’s group made a key advance in 2015 by determining the structure of the yeast U4/U6.U5 tri-snRNP, which at about 1.5 MDa is the largest pre-assembled spliceosomal complex. The cryo-EM map revealed the essentially complete organisation of the 3 snRNAs and more than 30 proteins. Prp8 was at the centre of the assembly, with the exon-binding Loop 1 of U5 snRNA inserted into the Prp8 active site cavity. U4 snRNA was already loaded into the active site of the Brr2 helicase ready for unwinding from U6 snRNA. The tri-snRNP structure provided valuable insights into spliceosome activation and the active site of the spliceosome and demonstrated that cryo-EM had the potential to reveal the structures of spliceosomes at various stages in the pathway, in the process of assembly, activation and splicing catalysis. Indeed, over the following 5 years a torrent of new spliceosome cryo-EM structures emerged from Kiyoshi’s group and several other laboratories around the world, revealing the architecture of most of the canonical intermediates from the yeast and human spliceosome cycles in atomic or near-atomic detail. The cryo-EM structures from Kiyoshi’s group alone have given us important new insights into early spliceosome assembly, 5’ splice site transfer from U1 snRNA to U6 snRNA, spliceosome activation, remodelling between the branching and exon ligation reactions and the mechanism of 3’ splice site recognition, among many other aspects of spliceosome structure, dynamics and catalysis. Overall, the spliceosome structures show that the U6 snRNA-based active site is cradled by Prp8, as predicted from the Prp8 crystal structure, and changes little throughout the splicing cycle; RNA helicases and step-specific factors dock and undock the substrates [branch site and 3’ splice site] at the single active site for catalysis of branching and exon ligation.

Kiyoshi was a treasured friend and colleague, and an excellent mentor – he was always supportive of his younger colleagues and took an enduring interest in their future careers. He is much missed by colleagues and friends alike: his keen intellect, his generous and sociable personality and his great sense of humour will always be remembered. It is a matter of great sadness and a cruel twist of fate that Kiyoshi was taken from us at the peak of his own career and achievements, but his work on the spliceosome forms a wonderful legacy that will inspire a new generation of biologists. Indeed, if you want to find out more about spliceosomes there is no better place to start than the latest review from the Nagai group: RNA Splicing by the Spliceosome by ME Wilkinson, C Charenton and K Nagai [Annual Review of Biochemistry] https://doi.org/10.1146/annurev-biochem-091719-064225 2019, doi:10.1146/annurev-biochem-091719-064225.

About the artwork:
Image by Clayton Gauthier, Artist in Residence at the University of Northern British Columbia.